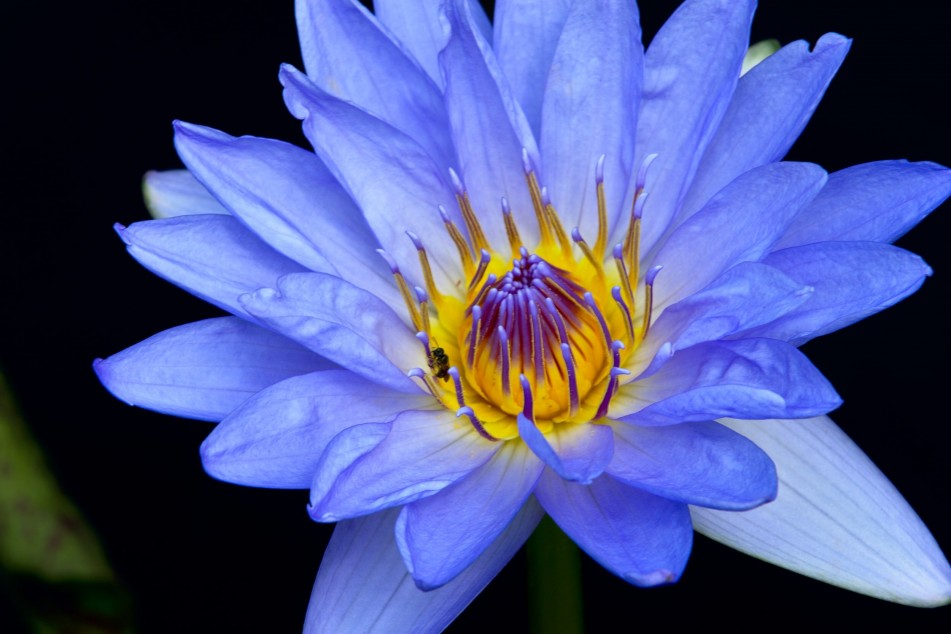 In many ways modern society has lost this relationship however when we look into our past, we gain a glimpse into this long and rich relationship.

There are certain plants whose uses far exceeded being simply used as medicine. Plants have long been used in the expansion of human consciousness and as gateways to connecting to higher realms of being.

Blue Lotus, Nymphaea caerulea is most certainly one of these plants. Also known as The Sacred Blue Lily of the Nile, Blue Lotus has been revered by many ancient cultures and civilizations from Ancient Egypt to the Ancient Greeks, Tibetans, and more.  Reigning from the lily family, Blue Lotus is a water lily growing wild in ponds and other bodies of water emerging from the primordial waters to bloom once a year for only three days. The flowers of Blue Lotus are highly valued for their exquisite beauty, intoxicating aroma, and their euphoria inducing effects.

Perhaps the most sacred and revered plant in Ancient Egypt, Blue Lotus was used extensively in medicine, magic, ritual, and celebration. The flower is depicted everywhere in Ancient Egyptian Temples and writings. It’s hard to find pieces of this ancient civilization without it. The Ancient Egyptians had a deep understanding of the nature of life and creation. The entirety of their culture was steeped in reverence for the natural world from the animals to the plants and everything in between.

The Ancient Egyptians had many traditional uses and applications of Blue Lotus. The flowers of Blue Lotus were steeped in wine which was than shared during religious ceremonies, rituals, and celebrations. Blue Lotus is said to connect one to the Divine, inducing higher states of being and consciousness. It is for this reason it was widely used in religious rites and ceremonies. Blue Lotus is said to induce a state of euphoria, promote relaxation, & improve circulation, making it a potent aphrodisiac. The Ancient Egyptians were known for being a sexual people, regularly taking part in rituals and celebrations around sexuality. There are countless depictions of these “famous celebrations,” and Blue Lotus is a central symbol within them.

The lily is often associated with symbols of creation, rebirth, death, & the sun. Part of its symbolism comes from the way it grows~ like other water lilies Blue Lotus emerges from the murky waters once a year to bloom for only three days. In Egyptian mythology, creation came from the primordial waters of Nun. They believed that in the beginning there was water and from that, creation was birthed. I find a powerful connection here, it is no wonder to me that Blue Lotus is the most sacred plant medicine to the Ancient Egyptians as it is tied to the creation of life itself. In fact this connection goes even deeper when we look at the god Nefertem who is strongly associated with the blue water lily, he is said to have emerged from the primordial waters in the lily itself.

Blue Lotus is also mentioned in “The Egyptian Book of the Dead,” as “the lily which shines in the earth.” There further references to the water lily in these texts as being a vehicle to ascension and rebirth. It was often integrated into ceremonies after death as a guide helping the soul reach the heavens. In other myths, such as a variation of the story of Horus the flower is presented as a symbol of the “all seeing eye,” when Seth rips out the eye of Horus he buries it in the sand where it is than transformed into a lily.

Blue Lotus in smaller doses is a nervine and relaxant helping to relax and calm the nervous system. It is also an amazing antispasmodic herb; helping to relax tight and tense muscles, allowing energy and vitality to flow more fluidly throughout the body. The energetics of the flower are bitter and cooling in nature.

The psychoactive properties of the plant are primarily attributed to two alkaloids: apomorphine and nuciferine. Apomorphine is a nonselective dopamine receptor agonist and activates serotonin receptors and α-adrenergic receptors. This alkaloid has been used as a sedative and hypnotic used to treat a wide range of conditions such as insomnia and anxiety since the late 1800’s. It stimulates dopamine receptors and improves motor function which is why it has been successfully used in the treatment of Parkinson’s disease. Nuciferine is associated with dopamine receptor blockade and has shown therapeutic potential as an “anti-psychotic drug.” It also shown potential in the treatment of vascular diseases where abnormal vasoconstriction is present, alluding to its potential as a vasodilator which relaxes blood vessels and arteries.

I became fascinated with Ancient Egypt at a very young age and at the age of 19 I traveled to this distant land on my own. It was the adventure of a lifetime that quite literally shattered my reality in countless ways and opened up my perception and understanding of the world as I knew it. The Ancient Egyptians were on to something, something precious and integral to the nature of life and the potential of our existence as human beings, that’s all I knew.

Despite being an herbalist fascinated with Ancient Egypt, I did not fully meet this plant in my body and consciousness until fairly recently. My first interaction was in small amounts in tea before bed. In this dosage and preparation I found Blue Lotus to be relaxing, inducing a dream like state. I found its effects to be subtle helping me drift into more easeful sleep. My dreams the first night however were very active and much more vivid. I also noticed dream recollection increased the next morning.

The next experience I had with this plant was much more potent. My lover and partner who is an alchemist has long used this plant. He shared with me a traditional alchemical preparation known as a Spagyric of Blue Lotus. There was one night when we were just beginning our journey of love where me and him consumed a decent amount of this extract infused into mead. It was this evening I experienced the more psychoactive properties of this plant, but it was so different than any other experience with psychoactives I had ever had. It was gentle but very profound, as we made love that night I felt completely immersed in the beauty of this flower and the sacredness of sex, intimacy, & connection.

My second experience with this plant that really captivated me was on a camping trip in the desert. I consumed some of the spagyric extract once again though a much smaller dose and than went to harvest some juniper berries. Before I harvest any wild plant I sit with it and ask its permission, when I sat with the juniper I felt I was able to drop so much more fluidly into communication with it, my heart felt so open in its communication. It was after this experience that I came to the conclusion that for me Blue Lotus is also a plant of connection, helping us connect more deeply to whatever it is we are trying to connect with, be it a lover, friend, plant, animal, guide, and more. What a beautiful gift it is.

Despite its overwhelming presence in Ancient Egypt it is very difficult to find this flower still growing in this region today. Due to this and the unique way in which Blue Lotus grows it can be fairly difficult to find ethical and reliable sources of the plant

This post was originally shared by Read more by Courtney Cosgriff on https://www.honeybeeherbals.co/contact.