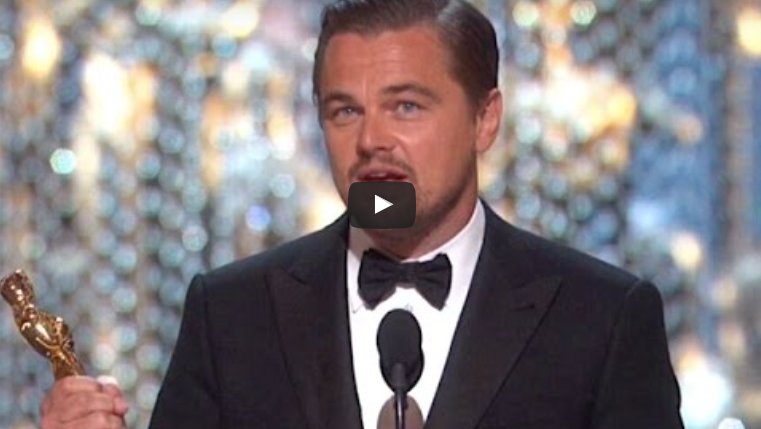 DiCaprio’s first Oscar win for Best Actor in ‘The Revenant’ highlights important changes that we all need to make.

DiCaprio uses his voice for the benefit of all mankind. An environmental activist and avid campaigner against climate change, which is the most threatening problem we all face, DiCaprio used his Oscars win to highlight what is happening and why we all need to collectively help.

“Climate change is real, it is happening right now. It is the most urgent threat facing our entire species, and we need to work collectively together and stop procrastinating. We need to support leaders around the world who do not speak for the big polluters, but who speak for all of humanity, for the indigenous people of the world, for the billions and billions of underprivileged people out there who would be most affected by this. For our children’s children, and for those people out there whose voices have been drowned out by the politics of greed … Let us not take this planet for granted. I do not take tonight for granted.”

Check also Al Gore’s TED Talk on Climate change and how we can help.

Al Gore has three questions about climate change and our future. First: Do we have to change? Each day, global-warming pollution traps as much heat energy as would be released by 400,000 Hiroshima-class atomic bombs. This trapped heat is leading to stronger storms and more extreme floods, he says: “Every night on the TV news now is like a nature hike through the Book of Revelation.” Second question: Can we change? We’ve already started. So then, the big question: Will we change? In this challenging, inspiring talk, Gore says yes. “When any great moral challenge is ultimately resolved into a binary choice between what is right and what is wrong, the outcome is foreordained because of who we are as human beings,” he says. “That is why we’re going to win this.”