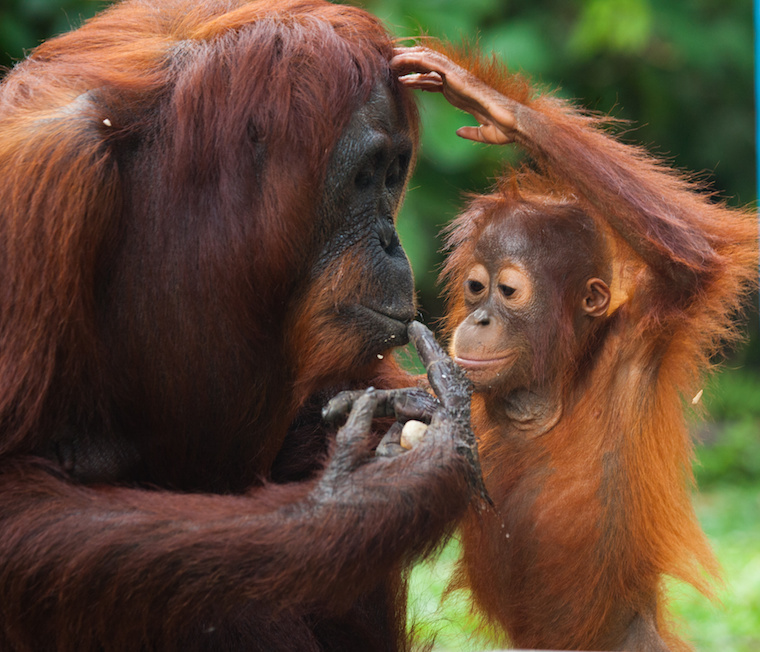 Palm oil is an ingredient in almost half the products on our supermarket shelves and to keep up with this demand the forest homes of orangutans are being destroyed for it… Say NO to Palm Oil.

What is Palm Oil?

It is predominantly used within commercial food due to:

This increase in demand for palm oil has led to the mass plantation of oil palm trees and this in itself has led to some devastating impacts on the areas in which they are grown. Palm oil by the numbers gives an overview of palm oil and its impact.

What is the Controversy Surrounding Palm Oil?

If you’ve read any articles in relation to palm oil, you’ve no doubt seen some horror stories. Due to the amount of oil that each palm can produce and the low costs involved in growing it, there has been an increase in cultivation of these palms. However they aren’t being grown in open spaces.

Forests within Indonesia and Malaysia are the main places where palm oil is produced (around 86%). These forests are being destroyed at an alarming rate so that oil palms can be grown in their place. So, by destroying the rainforest to grow these plantations, they are in turn destroying the natural habitat in which a diversity of wildlife and plants thrive and grow.

If you google images of pam oil plantations in Indonesia and Malaysia, you’ll see the extent to which the palm trees cover the land. From 1990 to 2010, 8.7 million acres of rainforest in Indonesia, Malaysia, and Papua New Guinea were cleared for palm plantations (Ethical Consumer, 2016)

One of the most recognised things to have been impacted by this deforestation is the destruction of land in which orangutans, elephants, rhinos and Sumatran tigers live. The forests in which these animals live are destroyed and their homes are lost.

Due to the unsustainable development and the high rates that forest is destroyed in Indonesia, a third of all mammals are critically endangered (Say No To Palm Oil, 2017).

It’s been found that if nothing is done to change how we are destroying the forests, it would be likely that species such as the orangutan could become extinct in the wild within the next 5-10 years and for the Sumatran tiger, less than 3 years (Say No To Palm Oil, 2017). A horrifying thought, that these things are carried out at the expense of others.

I’ve added the following at the end of this paragraph just to show the despicable impact we are having on species. I’m going to mention what I’ve read about orangutans, it’s quite upsetting to read…… It has been found that orangutans have been found buried alive, as well as killed from machetes, guns and other weapon attacks. Over the last 2 decades over 50,000 orangutans have died due to the deforestation, this is either during the process, or when they enter a village or other plantations in search of food.

It has also been found that mother orangutans have been killed by poachers and their babies have been taken to be sold as pets; used for entertainment in tourist parks; or shipped to different countries to live a life of abuse (Say No To Palm Oil, 2017).

It is not just the animals which lose their homes. The people who are indigenous to the forests also are forced out of their homes and the lives they once knew are destroyed.

As I’ve written above, the land which is destroyed is usually forests holding whole ecosystems, which are biodiverse (meaning they have a large variety of important and beneficial plant and animal life).

It has been equated that for every hour that passes, around 300 football fields of rainforests are cleared to enable the plantation of palm oil (Say No To Palm Oil, 2017).

When the rainforest is destroyed, it is burnt down. These trees hold and store a mass amount of carbon, causing an increase in emissions of carbon dioxide, impacting climate change.

Palm oil mills also generate lots of waste, which can lead to pollution, damaging those downstream (people, plants and animals), especially if pesticides and fertilisers are used (WWF, 2016).

Not just Indonesian and Malaysian rainforests are at risk.

Due to the increase in demand for palm oil with a multitude of products now using it, it is looking more and more likely that West and Central Africa are going to be targeted to enable expansion for commercial plantations (Rainforest Foundation UK, 2016).

The forest which is located on the Congo Basin, is home to a huge amount of biodiversity, as is around 200 million hectares.

It is also where over 40 million people get livelihood benefits, with it being estimated that there are around 500,000 indigenous forest people, which inhabit the forests. However, even though this area benefits humans, animals and plants alike, the governments which control these areas are welcoming those with opportunities of developing plantations within the area (Rainforest Foundation UK, 2016). If this is pushed forward, similar outcomes to that of what have occurred in Malaysia and Indonesia will most likely occur here. Especially if it is not controlled.

Could What Happened with Rubber Plantations, Happen with Oil Palm?

In Malaysia, the government lobbied (successfully) for rubber plantations to be classified as “forest” by the UN Food and Agriculture Organization (FAO).

There is a concern that this may also happen with oil palms (WWF, 2016).

What is Sustainable Palm Oil?

So, what does sustainable mean?

You may already have heard of sustainable fishing, crop growth etc. and this includes the production of palm oil.

Sustainable is defined as “conserving an ecological balance by avoiding depletion of natural resources” (Oxford Dictionary). From what I’ve written above and the figure from ‘Palm oil by the numbers’ showing that only 17% of palm oil  is sustainable, it just shows that if we don’t do anything about it, we are going to completely wipe out ecosystems which are of great importance, destroying the lives of many.

In all honesty, if the figure comes out that 83% of palm oil is not sustainable, chances are that most of the products you’re using which contain palm oil are not going to be sustainable. If they are, the company would promote this information to us, as consumers.

Sustainable palm oil, is where the aim is to produce palm oil that does not cause deforestation or harm to the people in the areas.

In 2004, the Roundtable on Sustainable Palm Oil (RSPO) was formed, a scheme which is in place to prevent deforestation from this industry. When buying products which contain palm oil it is essential that you purchase products which have the RSPO label. This indicates that the palm oil has been produced in a social and environmentally responsible way.

Although no primary forest or areas which contain significant concentrations of biodiversity, fragile ecosystems, or areas which are fundamental to meeting basic of traditional cultural needs to local communities can be cleared (RSPO, 2017), it is not forbidden that other areas of forest cannot be removed. You can read more about RSPO here.

How is Palm Oil Made and Used?

Here is a simple and quick example, The Palm oil Supply Chain, showing the process of how palm oil is produced and sent to manufacturers to be used within products.

Not Just Know as Palm Oil

There is so much controversy surrounding palm oil, that in some cases companies may not have it labelled as palm oil.

Similar to sugar and its multitude of names (high-fructose corn syrup, sucrose, corn syrup solids, fructose syrups, brown sugar and dextrose, useful tip – anything that ends in –ose is a sugar), palm oil also has a number of different names which you may find on your products’ labels instead of just ‘palm oil’.

I’m going to give you a short list of different names that palm oil and its derivatives comes hidden under, so if you’re ever reading the label and see one of these come up, you know it contains palm oil:

A full list can be found here on WWF

Another website which has a longer list of names is: Palm Oil Investigations: Palm oil – the hidden ingredient with over 200 names.

In December 2015, an EU law came into place which stated that the type of oil which is used within food products must be stated clearly on the label, however within other products that are not food, it does not need to be clearly stated.

Around 50% of the products that we use on a daily basis actually contain palm oil, including:

and even though above I said that it was used within foods, due to its cheapness and stability, it is also found in:

This WWF link has interactive images on why different products contain palm oil, which you can access here.

If you are going to purchase products which contain palm oil, it is important to try and ensure that they are RSPO certified.

It is important that we strive as consumers, to encourage companies to use sustainable palm oil within their products.

Ethical Consumer Magazine released an issue which talks about the impact of palm oil, which you can have a look at here (Issue 165 March/April 2017).

Rainforest Foundation UK and the Ethical Consumer Magazine joined up in 2015 to write about different products which use sustainable and unsustainable products – you can click her to read their ‘Palm Oil Guide’, a more updated link is here. ‘Say No To Palm Oil’ also have a page which talks about actions we can also take to try and make a difference which you can access here.

Lucy Bee is concerned with Fair Trade, ethical and sustainable living, recycling and eating close to nature with additive free products for health.

Members of the Lucy Bee team are not medically trained and can only offer their best advice. Any information provided by us is not intended to diagnose, treat, cure or prevent disease.

Please note you should always refer your health queries to a qualified medical practitioner.